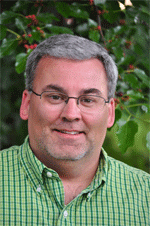 Terry Dalton is married to Debbie has three children, Jennifer, Chelsie, and Mowpheth. He moved to Stuart in 2001 where he is very active in the community.

Terry volunteers (since 2003) for the Stuart Fire Department where he was named Fire Fighter of the Year in 2009. He also is on the Jeb Stuart Rescue Squad. He is currently serving as Secretary for the Economic Development Authority as well as a member of the Town Council.

< Back to Council Members